“Faith is seeing light with your heart when all your eyes see is darkness.” ~Author Unknown

In all of it’s forms this quote couldn’t be more true for our sweet Faithie girl. This is her story about abuse, adoption and seeing light during the darkest of days.

Before I dive in you should know that I grew up with big dogs…big, long-haired, slobbering, loyal, golden-retrievers. I loved riding around town with our big golden boy in the back of Dad’s truck. Everyone at the ball park knew and loved him. I have always considered myself a big-dog-person but my hubby on the other hand was the opposite. He grew up with mini poodles and judging from stories I’ve heard he wasn’t quite the animal lover I was growing up. When we were dating I was adamant  that our first dog together would be a giant… like great-dane-giant. So it was very unlikely that we would end up with a tiny 7lb ball of fluff. Ha!

In college my roommates introduced me to Pet Finder. Despite the fact that it was not a good time for me to have a dog I soon developed the habit of going straight to the special needs section and falling in love with all of the babies that needed homes.

Skip forward several years and the Mr. and I are in our first year of wedded bliss. During a relaxing evening of ESPN I decided to get my Pet Finder-fix, went straight to the special needs babies and then I saw her. Before ever even reading her story I grabbed the treasured remote from Hubby’s hand, silenced the tv and told him I had just found our new furbaby. He chuckled and went right back to watching whatever game happened to be on.

This was the picture attached to her listing on Pet Finder.

I, on the other hand, became obsessed. I quickly turned into a stalker and discovered that her listing on Pet Finder was simply another rescue hosting her. She didn’t actually belong to that specific rescue. I googled the rescue she was under and called to ask where she was. No answer. I then sent not one but THREE emails. The first describing my husband and myself and that we were interested in her. The second explaining that we had discussed it and we felt like she would be a good fit. And the third desperately pleading that I just knew in my heart of hearts that she was supposed to be ours and to PLEASSSSE let us have her. Clearly I sounded mentally unstable and looking back I can’t for the life of me understand why they didn’t throw a restraining order at me.

The next day all three of my crazy emails were forwarded to the correct rescue organization and a sweet lady gave me a call. We talked for at least an hour while she told me Faith’s story of abuse and I sobbed the entire time. This is what I learned about her…

She was born in a puppy mill and had a birth defect which caused her right eye to be much smaller than her left and only gave her about 10% vision in that eye. The owner of the puppy mill had a young son who noticed the defect and wanted her left eye (the one good eye she had) to match the right so he grabbed a pencil and proceeded to dig it out. By the time the owner found Faith so much damage had been done that she dropped her off on a door step and left her to die.

That door step happened to belong to the founder of Cold Spring STARS a local rescue group. She said that it wasn’t unusual for her to wake up to an abandoned dog on her front porch but she was horrified to see what she thought was a dead puppy. She took a picture of the body intending to find out who had done this and turn them in. As she went to pick up the puppy she heard a faint cry and realized it was still alive. She immediately rushed her to the vet where they stabilized her until she was strong enough for surgery. Long story short she lost that eye. She was only a few months old. 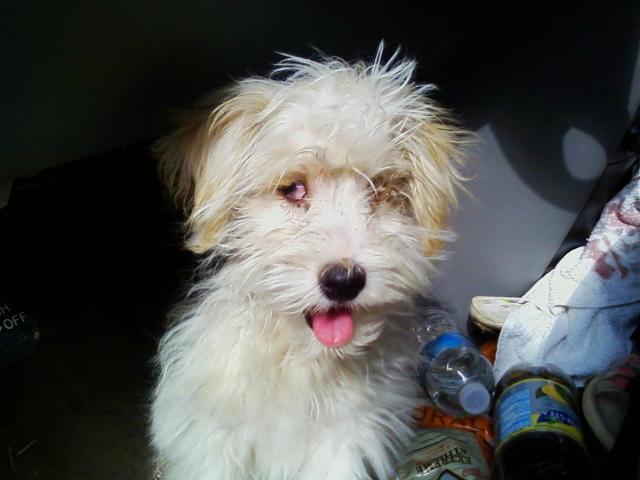 I still get so angry thinking that someone did this to her.

After she was released from the hospital Sheila (the founder of Cold Spring STARS) took her home to heal completely and appropriately named her Faith. Shelia’s rescue takes in all breeds of dogs but the ones who specifically lived with her were full grown pit bulls. All seven of them. Guess who ruled the roost? A four pound, one-eyed, ball of fluff. According to Sheila, Faith soon had her pits in check and they all took it upon themselves to be her over-sized body guards.

By the end of our phone conversation we had a date set to meet Faith that Saturday where she would be at Petsmart up for adoption. I was informed that I was one of three that was interested in her. What?! I didn’t sleep for the next 3 days.

Bright and early Saturday morning Hubby and I sprung out of bed and were on our way to Conroe. We arrived two hours before Sheila got there and I had already started to casually ask people who they were there to see. So far I was in the clear. Two hours later I saw a big van pull up that began unloading kennels. I met Sheila in the parking lot, introduced myself and offered to carry Faith in for her. Due to her prior abuse Faith was terrified of a kennel and was the only dog allowed to ride in the passenger seat. I scooped her up, she licked my entire face and the rest, as they say, is history.

Today, Faith is healthy, happy, has a zest for life, isn’t afraid of anything and never meets a stranger. Because she only has 10% vision from her one eye you’d think she would be terrified of everything but I actually have to be extra careful with her because she goes after anything she hears… bird chirps, cars, bikes, new places etc. We call her our little ping pong ball because she runs into everything, bounces right off and keeps on going. She’s the perfect example of how to fall down 7 times and stand up eight. Faith has taught us so much about life and I’m so incredibly thankful for her. She’s constant inspiration and a daily reminder of what we all can accomplish if we just have a little Faith.

Sporting her tutu this past Christmas.

I’m a HUGE advocate to adopt instead of shop. With thousands of adoption agencies, rescue groups, ASPCA, and even breed specific rescue groups there’s no reason not too. If you’d like to donate, volunteer, or pray for Faith’s rescue you can do so HERE. They’re a nonprofit organization and due to a lack of funds they’re having to shut down. They are in desperate need of shipping the remaining dogs they have up north to other rescue organizations who have room. Anything you can do is greatly appreciated.