Growing up my parents taught me it was rude to invite myself over to anyone’s house, friends or family. I knew the rules. I knew them better after my toosh was on the receiving end of Dad’s belt for asking Kate’s mom if I could come over and ride horses. After that I learned my lesson and never invited myself anywhere ever again. Except when I was at Mema’s. Right before my parents would arrive to pick me up from a fun filled day at Mema’s I’d run up to her and whisper “Can I please stay?” and then quickly “But don’t tell Mom I asked.” She never turned me down.

We’d lay in bed at night with Jiggs (her little pomeranian) snuggled between us and trace pictures on each others’ back trying to guess what the other drew. It always ended in ‘I love you’ and then ‘I love you too.’ Our mornings would be filled with me sitting on the bar in the kitchen – bare feet and all – while she whipped up pancakes and sang ‘I love you like I used to love you when I used to love you lots and lots.’  We’d watch episodes of Lassie and Flipper, play Go-Fish or checkers and she’d patiently answer my never ending questions of ‘why?’ Why does Jiggs give me kisses all the time? Why do you have blue lines all over your legs? Why can’t you come home with me?

Inevitably Mom or Dad would knock on the door and play time was over. I’d give Mema a kiss, then Jiggs a kiss (so he wouldn’t feel left out). Mema would stand on the porch and wave until I couldn’t see her anymore.

Skip forward a few years and I was a preteen in Junior High. Conveniently Mema’s house was within walking distance of the school. So that’s where I’d be every day after the bell rang setting us all free. I remember being made fun of because I’d choose going to Mema’s over hanging out with friends. I didn’t care. 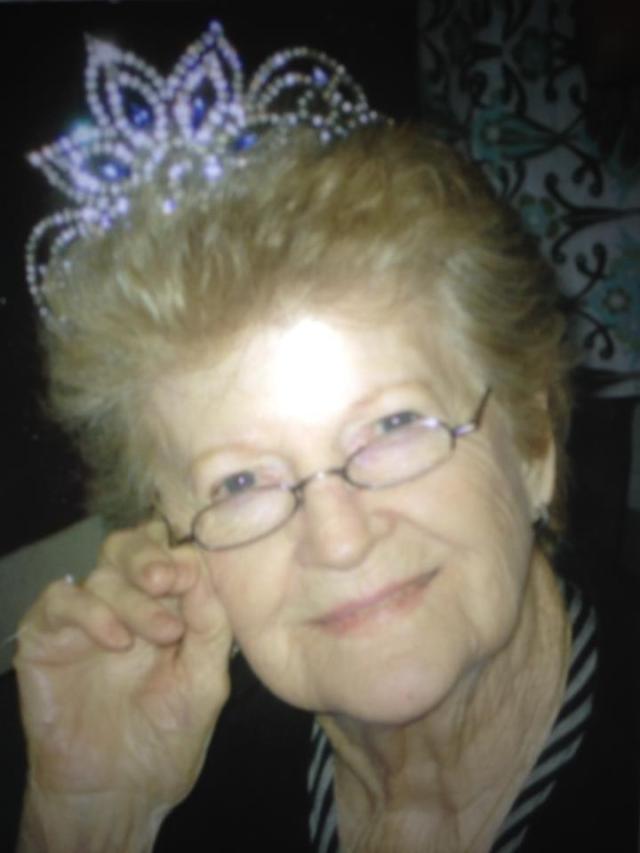 Skip forward another few years and I was in high school. By this time Mema had moved up to Lampasas in the hill country. I called her often. She’d pick up and I’d enthusiastically sing “Hi Mema!”  she’d reply “How’s my little angel?” She always knew my voice … this was pre-caller i.d. I’d update her on softball, teachers, friends, and boys every once in a while. I longed for Thanksgiving, Christmas and summer break so I could visit.

A few years later I received a scholarship to play ball in Arkansas and moved to a completely different state not knowing a soul. When I was homesick I’d often call Mema but I began greeting her by saying “Hi Mema, it’s Lindsay!” Recognizing my voice was few and far between but I shrugged it off thinking ‘I’d be confused if I had 23 great-grandchildren too.’ I brought a boyfriend home with me for Christmas one year, excited to introduce him to my Mema. We all told stories and laughed together in Grammy’s living room. Mema soon became hot and wanted to take her pull-over off, however, she accidentally grabbed her shirt with it and proceeded to flash everyone-my new boyfriend included. It brought on a roar of laughter and instead of being embarrassed she leaned over to my bf and said ‘You’re welcome.’ She was the best.

Over the next year or two we all started to notice small changes in her. Any time I’d leave her house she’d cry and say ‘Do you know how much I love you?’ She’d get our names mixed up and would go through the list before getting it right, ‘Debbie, Dodie, I mean Lindsay!’ She didn’t remember our voices anymore or how to get to Wal-Mart. She was soon diagnosed with dimensia and then full blown Alzheimer’s shortly after that. I won’t go into the gruesome details of this horrid disease but our conversations soon revolved around how a zipper worked or crumbling up a tissue, and straightening it out only to crumble it back up. I was happy just to hold her hand.

July 29, 2011 my Mema was greeted at the pearly gates by my PoPo in Heaven. We had known the end was near for a couple of days. That morning my mom called and I knew before I even answered the phone. She simply said ‘she’s gone.’ I’m sure she followed it up with ‘I’m sorry sweetie’ but I don’t remember. My ears started ringing, heart was pounding, I couldn’t breathe. I crawled back in bed and stayed there.

Praise the Lord for my sweet husband. We had been married a mere 43 days and should’ve still been blissfully happy in our own little world. Instead he was literally picking me up out of bed and helping me shower. He held me all day and all night through endless tears. He forced me to eat when I had no appetite. And when it was time he packed my bag and drove me 6 hours to Lampasas, TX where I stood with trembling knees to kiss Mema goodbye one last time.

During her funeral the pastor paused and invited family to come up and say a few words. Before I knew it I was the first one at the pulpit. For the first 5 minutes I didn’t say a word, I balled- full on ugly face cry- in front of my entire family. Just as I was about to give up and walk back to my seat without a word said, my cousin Meagan came up there and held my hand. Family is a funny thing. Sometimes just their presence is comforting. Having Meagan next to me gave me just enough strength to choke out what I wanted to say.

I think God gave Meagan and her brother Travis all of the musical talent in the family. The night before the funeral many of the great-grandkids gathered in a spare bedroom of my Aunt Margie’s house and we listened to them write and sing a song that they performed at Mema’s funeral. It was appropriately titled ‘Betty Marie’

It was 1923, in the midst of the Iowa cold. A Christmas gift come early, a wonderful story to be told. The cry of a baby girl, breaks the sound of a silent night. The Foundation of our Family, sleeping by the candle light. No one could know the love she’d bestow, And how beautiful it’d be. And so began the life of Betty Marie.

It was 1946. We’d just won the war. She had two little girls with red hair and curls that she was caring for. She was working at the picture show, just tryin to provide, When a handsome man took her by the hand and gave her the rest of his life. He came along, raised those girls as his own, and they were a family, Sharing the love of Betty Marie.

Many years went by. Her family had grown. From three little girls to nine grandkids and they each had kids of their own. Our families would grow, but never grow apart, Cause the spirit of our Mema always stayed within our hearts. Now that she’s gone we must carry on Her loving legacy, To honor the life of Betty Marie.

Afterward I remember being at her grave site, she was lowered into the ground and everyone was leaving to go eat casseroles I didn’t have a stomach for. I remember wanting so badly to say ‘Why can’t you come home with me?’

Two years. Some days it feels like it’s been two years and others it was yesterday. It still hurts just the same. A picture, a song, any Audrey Hepburn movie, a flower, a pomeranian … something always brings her back at least once a day. Usually memories and tears flow but every now and then a smile peaks through. Even as I’m typing now tears are flowing which is ridiculous because it’s the last thing she would want. Maybe later I’ll get my act together but for now….

One thought on “Betty Marie”